Yesterday we left you hanging! Peep on over at Part 1 if you missed it before you read this post!


Britni had spent her entire 6th grade year being the mean girl, even into a portion of her 7th grade year...before things began to take a turn for the worse....

She was in a private Christian school where many kids ran around with smiles on their faces and "acted right" at the "right times", but were completely different behind the scenes. And we all know girls are pretty sneaky. They know how to appear innocent when necessary and still do damage to those around them, all while keeping a smile on their face!


In Britni's own words:
"Midway through our 7th grade cheer season, everything changed. A new girl decided to join the squad. She just transferred from a public school and she was gorgeous. Not to mention, just as cruel as we were. Being the new girl, she stirred curiousity from our peers. From myself, she stirred jealousy. I tried to protect what my friends and I had "built" for ourselves by gossiping about her and spreading around half true stories I had heard. But instead of joining in with me, my friends flocked to her. Needless to say, I was left once again, alone. Abandoned. Just like I felt from my parents divorce. I really hit a low point in my lost and festering emotions. I spent many times at school alone now, usually eating lunch in classrooms or bathrooms. Ellie stuck by me. It got so bad I decided to quit my private school and study at home for the rest of 7th grade year. I was so angry and hurt. I wanted nothing more to do with these people. I wanted nothing more to do with people in general. All they had proven to me was their capability to leave. 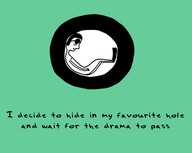 It was while I was at home that "the rumor" started. I began hearing comments from people regarding my sudden disappearance from school. Lies were being spread around that I was pregnant. They were whispering, gossiping, word vomitting all over me. ME! I was the gossiper, not the gossiped about! And yet, somehow, I had become the center of a vicious and degrading rumor mill for the first time in my life. Honestly, at the time I'm not even sure I completely knew how you get pregnant. My reputation took a beating. But this was the thing it took for me to take a real close look at myself for once. I had to swallow my pride and realize that they were now treating me how I had treated them. I was finally reaping the harvest from the seeds I had sown. Although I spent the remainder of my year feeling completely alone, I had started a process of growing up and allowing God to work on the mess of pain and filth hiding in my heart.


God began to bring across my path some wise individuals who spoke truth to me. One man once told me, "If you want a true friend, be a true friend." I pondered what that meant for me as I took this year at home to re-build. I also learned that it's okay to hurt, but you need to talk to someone about it. You can't deal with pent up emotions by yourself, otherwise you'll end up pouring out your wrath on others. So, as 8th grade finally came around, I gathered the courage I had gained and the lessons I had learned and headed back to school. That next year was easily one of the best school years I've ever had. And what's even greater? I gained true friends, many of which, especially Ellie, I've been close with to this day (a whole 8 years later)."

Insights: (not that these are correct actions or motives, these are observations of WHY)

1. It was because of Britni's jealousy that she lashed out at the new girl. Jealousy breeds drama.
2. In Britni's mind, the new girl threatened the friendship structure she had built with her friends, so Britni went into protective mode, trying to keep the new girl out.
3. Shallow friends abandon for the next new thing.
4. The friends she gossiped with, now gossiped about her.
5. It took something big for her to take a look at herself.

Now this story reads really quick and simple, but I know that the living out of these two years, especially the last one, was long and hard with much pain. She explained to me the reason her 8th grade year and on were so much better. She and some of the other girls had learned their lessons and made a decision to leave the drama behind, to change their ways. They stuck together. They split ways with those who continued to live in and create drama. That was key.

Britni is extremely remorseful for pain she caused. I offered to write this story anonymously, but she said no, she needed to "own" her past. Her hope is that girls may listen and recognize any behavior of their own that may need changing.

There is still more to come on this huge subject.

Helping girls understand the motives of why people act the way they do is key to 1) building empathy and 2) helping girls not internalize mean behavior toward them as if they are at fault. Generally, the mean ones are hurting inside so they bring hurt to others. The victims often wonder "what's wrong with them" and internalize the pain as if they themselves are at fault. It doesn't lessen the pain at all to understand why someone is mean to you, but it can help your mind understand the situation and know that it's not your problem, it's theirs.

Broaching that subject soon. Stayed tuned.
Posted by Holly Tumpkin at 9:43 AM