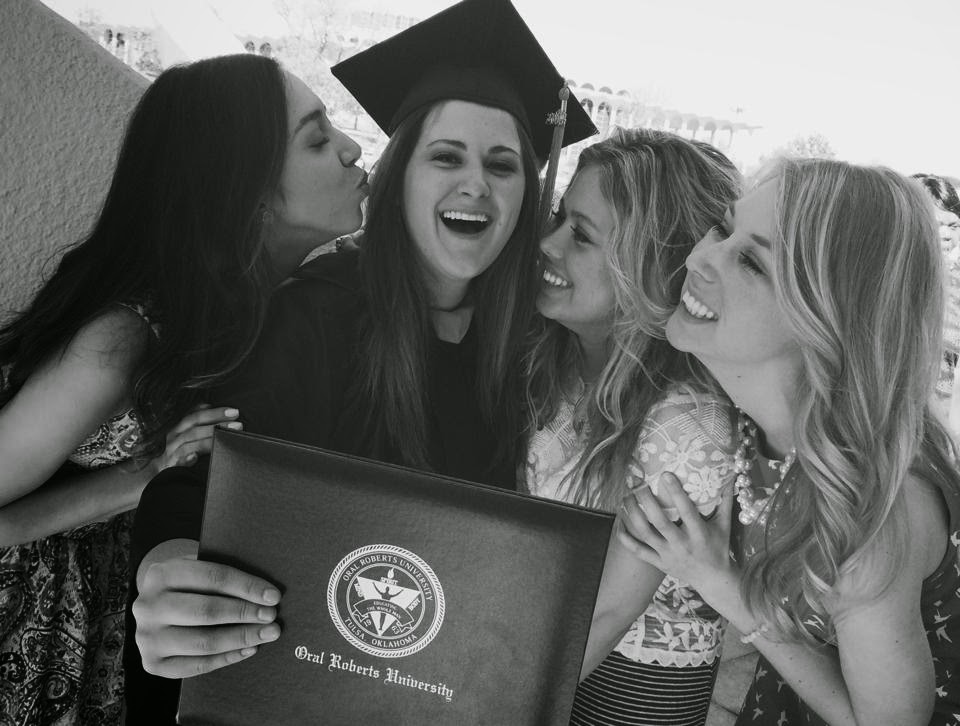 Jamie is the one in the picture who just graduated. I've had the privilege of getting to know her as she and my daughter have been friends at ORU. She has stayed at our house, spent a month in Africa with my daughter on missions, done Bible studies with us, helped with Girls 101, plenty of things. She has impressed me with her heart for God and what she's allowed Him to do in her life.

She would say she has changed a lot since her teenage days, and has let God into the difficult places, and let Him grow her up into the person she was made to be. She also has a blog where she shares some pretty profound thoughts, so you may want to follow her.

I wanted to ask her to answer a question I've had for girls who are still relatively close to teenage years. Things have changed so much since we were teens, and I have been curious to hear the thoughts of a few girls who can answer this question:

"What are the 5 biggest challenges to American teen girls?"

1. The pressure to grow up. I feel like a lot of girls just want to be "there" already. They want to wear makeup sooner and play outside less. They want to do what the older grades are doing because it looks cool and more fun.
2. Trying to figure out who you are. Girls want to be so unique but they also don't want to be the odd one out. Nobody ever wants to be the one on the outside of the circle, so I feel like a lot of girls give up things they like in order to be somebody that fits in. They want the likes on Instagram, Facebook, and in school.
3. Boys. They aren't as nice as they seem, and they aren't as mean as they seem. They're young, you're young. Girls want somebody to care about them, they want somebody to call theirs. They want that attention and I think a lot of stupid things happen because they're young and they don't understand the weight of their actions. It's honestly not a big deal to them at the time. Purity isn't really all that cool at that age.
4. Knowing who to be influenced by. Media is crazy today and girls see these beautiful pictures on Pinterest, Instagram, TV, music videos, wherever, and they see how cool that looks. They want their life to hold as much carefree, spontaneous and unique adventure as they see. They see how much fun it looks. Christian media hasn't done a spectacular job of being appealing in the media, and half of that is because we copy what the secular world is doing and slap a cheesy Bible verse on it. Girls don't want to be the odd one out, plain and simple. In the media, they don't see all these perfect girls missing out.
5. Partying. It's happening earlier and earlier and I think that's because of how easily it spreads. Through Snapchat, texting, and pictures that are posted online, girls see girls in the grades above them do it and they think it's okay because they weren't "the first ones". They want to have harmless fun. They hear the stories of their friends laughing for hours on end, or about how they don't remember taking this picture or walking to this place and a lot of girls want to be able to join in on those exclusive conversations.
The overall thing I keep going back to is acceptance. From friends, boys, the older grades, parents, etc.
My name is Jaime Bofferding and I'm graduating from Oral Roberts University with a Psychology degree and a business minor. I am passionate about people, media, and promoting Jesus in an authentic and real way. Check out my blog at: jaimebofferding.wordpress.com

Jamie would say that she has found answers to these challenges in her relationship with the Lord, and finding her identity, purpose and acceptance in Him.
This is a helpful summary of what we can watch for as we guide tweens and teens into adulthood. Girls definitely feel the pressure of these things, and if we know what the problems are, we can be better equipped with some answers.

Posted by Holly Tumpkin at 5:42 PM