I have been reading with one eye a lot of things in the news lately about young girls, not because I don't care about the subject, because I do. But some things are so outrageous I don't like to give them attention. Like the show Toddlers and Tiaras. Lately though, the show has made national news for some outrageous things and it's time to stop ignoring the yuckiness.

I've never wanted to be a basher. I'd rather put good in front of people and let it speak for itself. But in the last month, two stories about Toddlers and Tiaras have put me over the edge. And you have probably seen the current cover of People magazine at the checkout stand speaking to the issue also. Now I have to speak up.
Credit: TLC/Splash News

For those fortunate enough to have missed the stories, first, a four year old girl wore fake breasts and a padded butt to emulate Dolly Parton. In the same week, this three year old you see in the picture wore a prostitute costume emulating Julia Roberts in the movie Pretty Woman. Both moms defended the costumes, though there has been much public outrage. Click on the links and see for yourself. As many are actually defending this, many more are speaking out against such behavior. Thank goodness.

The ridiculously early sexualization of girls in our culture is no secret. But we are declining faster and faster. Things are out of control. One thing I know, girls already feel enough pressure to grow up too fast. They already see females sexualized everywhere they turn. They already have too many daily messages coming at them that their entire worth is in how they look and in what they offer sexually.
But for the ones who are supposed to be their protectors and role models to encourage such shortsighted antics is just too much. And for me it doesn't stop there. Watching it for entertainment is too much also.

I am not a fan of Toddlers and Tiaras. I'll be honest and say I've never watched an entire episode because I can't stomach the whole concept. I think it's cheap entertainment and some things border on child abuse. I can't watch that for entertainment. I won't disown you as a friend if you do watch it, but I'd like to challenge the thinking for a moment. I may lose some people here but I will go as far as to say this: in my mind it's not a far stretch to say it is in the same vein as the days of history past. In Colosseum days the public watched violence and death for entertainment. We may balk at that. How could they have been so desensitized to sit and eat popcorn (or whatever they ate back then) while people were torn apart and killed in front of them? But today people watch young girls be subjected to what most would agree is a questionable world at best, and I believe damaging to them, for the sake of entertainment. And we give time and attention to moms who have obvious issues of their own, living selfishly through their girls. If you do not agree with the show, why support it by watching?

I remember hearing my girls talking about an episode of Toddlers and Tiaras once. (It's not part of the regular viewing of our family, but yes they have seen it). What's interesting is what I heard them saying about it afterwards. On their own, they were smart enough to see through it all. I asked my middle daughter Lauryn, who is 15, to share those thoughts again for this blog. She said she believes the little girls involved will one day be thinking "My mom doesn't think I'm good enough without all the hair, makeup and outfits, so I'll always need them to be good enough". She also felt like the girls in the shows will grow up being super insecure, or perhaps super snotty because they "get everything they want". They will also have to combat the pressure to always be perfect.

There is so much to say on this topic. I feel a series coming on. There are some great things being done to combat this culture that's trying to take over. I can't wait to share some of them with you! Let's start by saying this, let's keep our girls young while they are young!
Here is what my own girls looked like at 4 years old:

Role models were Elmo, Mr. Rogers, and Cinderella. Activities of interest were playing with toys, dressing up, spinning, raising turtles in the backyard, drawing and pretending to be sisters (yes, even though they were sisters, for some reason it was more fun to pretend they were sisters). When they were 4 they acted 4. I wanted them to be 4.

Today they are strong, full of character and have very healthy identities. That was 10 years ago...and things are declining faster now. Is it still possible to keep girls young and innocent today? Of course it is!

Here is one of my current favorite four year old girls, Lexi, daughter of fabulous Rabu and Kyna. 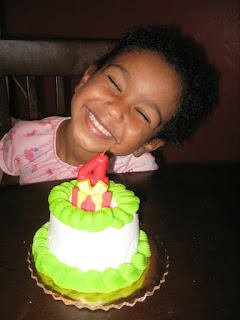 Lexi says her favorite thing to do is play. When asked to explain she said playing with her sisters, coloring, soccer, playing with blocks, dressing up, watching movies and sleeping! 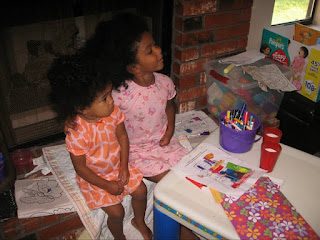 She is adorable and smart.

The girls I have talked to over the years actually want to stay young as long as possible. They don't like the sexualization of girls either. They want to be valued for who they are as people.

Can we keep girls young? At least while they are young? Can we bring back childhood innocence?

Let's reconsider what is appropriate for young girls- in clothing, activities and entertainment.