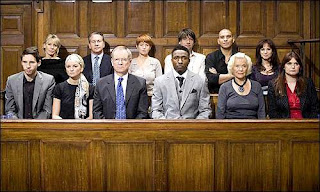 So I complained from the minute I received the summons. Cursed my "twinfriend" for rubbing off on me even with this. My friend and I seem to be twins 15 years apart we have so much in common. It even becomes eerie at times. I just babysit her boy while she had jury duty. I barely turn around and there's the summons in my mailbox. Curses.

I begin calculating plots to talk my way out of duty when it arrives. I whine and moan to friends and family. No one really cares. I resign myself.

So yesterday, (which now feels like 2 weeks ago since I've now served 2 days) I rise at the crack of dawn to begin the day. Being a stay at home mom, I normally roll out of bed daily at the minute I have to take child #1 to school. About 8am. I don't get ready until home from taking child #2.  So to be downtown, a solid 30 minute drive, looking decent, at 8:30 in the morning, needed an early start. Time had to be allowed for getting lost, parking, walking, security, and most importantly, the Starbucks run on the way.

The car got parked, I began walking wherever the crowd walked, hoping they knew where they were going.  I found myself waiting in a line to get in the building through a door marked "Exit Only". So far so good, this is about how I expect the system to work. I'm scanned and approved and pointed down to the basement, only to be met by 300 solemn looking people winding back and forth through  a long skinny somewhat steamy hallway in lines that didn't really make sense.  I'm a people watcher, so the fun was about to begin.  But before I had much of a chance,  I internally gasp as I move ahead in line to be greeted by a large ghoul holding a sickle, pinned to the wall. What a greeting to jury duty! Was this planned? I look ahead to the next area around the corner where my line is leading to and find Halloween decor still up. Really? It's Nov. 7 at this point. But it set a menacing tone for the day.

I watch and listen. There are countless small conversations joking about how they plan to get out of service. We are all so patriotic.  I listen to the Jokesters of the group, looking to liven things up. There's always one. There are the Chatters, looking to strike up conversations to entertain themselves through the long line.  There are the Informants- the ones who share their jury expertise in a loud tone making sure everyone knows what to expect, because they have served before, and now are the resident experts.  There are those who share their horror stories of previous duty, seeming to revel in the gasps their stories provoke. There are the Expressionless ones, that there is really no way to read one way or another.  Do they feel? Speak? Do I appear to be one of those?

People pass through our line saying excuse me, which really isn't easy to do, excuse them, that is.  In order to pass, each of us in line has to squish against the wall to make room. I see a woman reading a book with a title something like "Teenage Boys- How to Make a Man" and I'm kinda excited there's moms caring about raising boys as much as I care about raising girls. I consider saying something to her, but it's morning and we're all still in our cool, calm, collected, group-think guarded mode. I decide to remain in my quiet observer people watcher mode. It's too early to reach out. My coffee is still being digested.

Boy this hallway is crowded.  I do feel somewhat better knowing that I'm surrounded by a close knit crowd of citizens who have never committed a felony.  They can't be all that bad.  I near the front of the line and read the plaque posted about the lady in charge, an article from a local magazine.  Basically stating, don't mess with her. She's heard it all and has no mercy. Well then. Ok.

Finally at the front of the line, I check in, get my card, sign on the line and then, the big moment. I begin eyeballing the area for a place to plop for the day. The spot. It has to be good. No mistakes can be made here. Creatures of habit, wherever people choose, they will sit there all week. According to my friend, I will spend hours on hours upon hours on end in this spot I pick. Seeing that a huge amount of people have already picked a spot, and in a very American-like way, everyone has ONE space in between them, no matter where I pick is going to be the awkward sit in between two people in a small area thing anyway. I scan the area, I walk through the side room, I see hard chairs, soft chairs, tables, sofas, tv's, laptop areas. I go for the back, seeing two nice older men on each end of a sofa. They look nice and harmless. I go for the middle, opting for a sofa type comfort for the day. We exchange pleasantries and I pull out my Ipad, settling in with my purse/bag of tricks cram packed full of entertainment for the day. My plan is to be uber productive today as I sit. Lots of writing will be accomplished!

Not three minutes into it, I hear Jokester and his friend he's met one time through work, talking about playing cards. They are right in front of me at a table, less than 5 feet away. A nice fun looking lady has joined them. I glance up and watch them debate their vague memories of rules for Rummy.  RUMMY! I love cards. I know the rules to Rummy. I look back down at my iPad, ready to write, but keep my ears alert on the conversation.  They need me. They are struggling. I can tell. I feel a magnetic pull from me to the table full of card players. Which personality should I choose today?! The quiet recluse or the life of the party? I've been known to lock people in my house to play games with me. I love games. Not everyone knows I actually have a split personality. I was so confused as to which to call on that day. The magnetic pull overpowered, I looked up and said "I know how to play" and we were all bff's immediately. The party table! So for the next few hours we played cards and laughed. Interrupted occasionally by oaths and summons. The oath was a bit surprising, ending with swearing we weren't "mentally retarded".  In this politically correct world, no one has updated this oath?!

Shockingly, two people at my table were both in rock business. PERFECT! I had a captive audience! I inquired about my "stinky granite problem", but once again, just like the "answers" in Google, they had no answers. According to everyone, granite countertops are not supposed to be stinky. But I, and many other rule breakers online, have stinky granite nonetheless and can find no answers. Back to cards.  We stop periodically, irritated by the distraction to our card game, to listen as jurors were being called to duty.  As the ridiculous shaking of the archaic metal box echoed in our ears, we waited for our name to be called. Such a terrifying wait.

Sadly, throughout the day, our card teams were disbanded as someone got called away to duty.  It was never more than 30 seconds before a fellow fun person came and grabbed the seat of the patriotic juror. Eventually we were all called to duty.  Three of the four of our last hand were called together. Twice. For being a random drawing, that was freaky! Off we went to court.

This is where the humor ended. What at first felt like  a nuisance in being summoned, became a serious job as several of us found ourselves in the middle of criminal cases. People's lives were at stake.  We watched and listened as cases were unfolded before us. We had to relive the pain of people's lives and makes decisions as best we could.

Deliberation was so interesting. What seemed so easy and obvious to me, was not easy or obvious once we got 12 strangers in a room expressing viewpoints and opinions. I realized how complex the world is. And people are. And how I would not want to be a judge. Or God. I gained respect for fellow jurors that at first glance I may have overlooked or judge wrongly, but in reality were very decent people with very good hearts. We hashed out differences, eventually came into unanimous agreement and had no bad feelings towards one another. It worked.

Even though the actuality of court was no where near as fun and entertaining as Drop Dead Diva, my favorite tv show (I did do my best to dress the part and represent),  I must say by the end of the trial I found myself valuing the whole experience. The judge made the comment that if jury duty was optional, juries would be full of jurors who had nothing better to do, which would definitely influence the outcomes of trials.

1.  Given enough time together, a roomfull of random strangers will humanize into real people.
2.  Everyone should know how to play cards.
3.  Never order a BLT sandwich at the courthouse snackbar. Ever.
4.  Jury duty isn't that bad.
5.  Your life is just one tiny speck in a world full of so many different kinds of experiences.
Posted by Holly Tumpkin at 8:48 PM