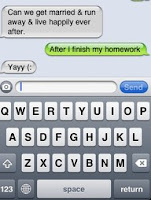 From the old days of a giant phone strapped to the wall with a spirally cord.  We had to actually stay in one place (in the house none the less) to talk. There was ONE NUMBER for the entire family. "Special- amazing- LUCKY kids may have a second phone line installed in the house for them. (gasp!)

AND we had to answer the phone with manners when it rang. "Yes, just a moment please." And when we called friends. "May I speak to so and so? This is ___".

Then came cell phones, then texting, then MySpace (thank God that's pretty much out), then Facebook, then Twitter and Tumblr. And on and on.

Echoing in my head are the voices of SO MANY high school and college aged girls  (and some moms of girls who have heard the same) who have lamented about boys who don't seem to know how to talk face to face. Like they are hiding behind technology. Too afraid to approach them in person. So instead the guys send a Facebook message as an icebreaker. Or ask girls out by text. Let me add that this is in 1,2,3,4,5 different states I'm talking about. One state didn't seem to have the problem. I can't share which, without ratting out the source, so you'll have to wonder.

The girls are not impressed.  I would sooooo love to hear the guy's side of this!! (Moms of boys, please comment!!)

On another note: Friendships among girls are affected by these new forms of communication too! At a recent girls meeting, this was the topic of our conversation.

I want to highlight just a few things discussed among these girls. These might be great conversation starters for you and your teen!

1.  I didn't have to come up with examples, because girls read me hilarious conversations straight off of their phones of all kinds of misunderstandings via text.

Texts don't allow any kind of normal communication skills to take place. In person, we hear the voice of the person, hear mood and expression, word inflections, which words are emphasized, see their facial expressions, hear the tone of their voice.

One sentence could be interpreted 5 different ways on a text.

Before you jump to conclusions, pick up the phone and call the person at least. Have a conversation.

2.  Therefore the girls decided it's best not to have important conversations, or fights, over text because it's too complicated with all the possible misunderstandings.

3.  All the girls had experienced this- Disappointment when they get together with a friend and that friend spends the entire time on her phone, or on facebook, or texting other people.

So much rudeness! We need to have some phone ettiquette in place.

The actions of that friend communicated, even though she didn't actually SAY words.  How?

I asked the girls what that communicates to them. The answer? "That they would rather be with that other person than me. That I'm boring them. They don't want to be with me."

Please have a conversation with your child about this. So many do this. Manners.

4.  Girls reported being kinda paranoid about texts received because they couldn't tell the tone of the text, simply because of lack of (or too much) punctuation.


Example-  I text someone. They send back "Hey!!" (they are excited to hear from me). What if they text back "hey". No punctuation. If two or three texts come across like that, I may start to wonder "are they mad at me? what's wrong??"  Silly, but real.

5.  Here's a bad one. Almost everyone had seen (or done) this- people texting someone ACTING like they were someone else. Boy, if that isn't a way to get in trouble.

But it's true, when you receive a text, there is no absolute guarantee that that text is from the person you think it is. Because you can't see them.

Because all of these girls knew of that situation happening, the odds are it happens alot. I've seen girls do this so I know it's common.

I text. Daily. I'm not against texting!

But we have to see that all these new forms of communication require with it some guidance along the way.

MORE TO COME tomorrow on this topic. Stay tuned!!