I know none of us like to think about Dating Violence, and the possibility of it happening. It's no fun! And that is the reason to talk about it during this Awareness Month. Because it does happen. Last year, a group of high school girls gathered and listened to my friend tell this story we are sharing today. She lived it.

I'm grateful to my friend for being willing to share her personal story with you.

"Over 15 years ago, what now seems like a lifetime ago, I found myself in an abusive relationship. I didn’t realize until long after I’d gotten out, that there were so many levels of abuse – it’s not just physical abuse, but also emotional, mental & sexual. Most people who know me now, can’t believe I was ever in an abusive relationship – I’m strong, independent, outgoing, don’t have a problem setting boundaries with my friends & family, I was raised by great parents with a relatively normal childhood (divorced parents, but hey, that’s not really abnormal). Yet, more than 15 years ago, I found myself looking in the mirror at a gigantic black eye wondering how in the world I let that happen?


The relationship started in a bar - both of us liquored up and then hooking up. I was newly divorced, only 23 years old and looking for my “knight in shining armor.” For this story, we’ll call my abuser “The Knight” – even though he was FAR from what we all picture as little girls. The Knight & I started our relationship off with booze & sex – great foundation, huh? We partied together a lot and partying always led to The Knight getting jealous because some guy looked at me sideways. Oddly enough, it was always MY fault if a guy looked at me and always ended up with me having to convince The Knight that I wasn’t cheating on him. For about a year, there was no physical violence, only constant accusations of infidelity on my part (I found out later, he was the one cheating – quite enthusiastically at that!).

Then one cold, January night at the bar, a long-time male friend dared to buy me a drink AND put his arm on my shoulder. The Knight’s jealously grew and grew that evening until finally we had to leave the bar. At one point, after yelling at me for what seemed like an eternity, The Knight pulled the car over, dragged me out of the backseat and threw me into a very cold, very hard snow bank. Then he pulled me up and threw me down again. This happened several times until his friend pulled him off me and I was able to crawl back into the car. At this point, I didn’t know if I’d survive until morning. I couldn’t make sense of what had just happened. No one had ever physically manhandled me like that! I was hoping and praying that The Knight’s friend would somehow calm him down and everything would be ok. When we got to our apartment, I raced upstairs and hid in my small son’s bedroom (note that my son was not at home). Unfortunately, The Knight’s friend turned his back on me as before long, I was being dragged out of the bedroom, was picked up by the waistband of my pants and the back of my shirt and was tossed across the kitchen to land on my face and slide into the cupboards. I literally saw stars and didn’t move for what seems like an eternity. I was petrified. Something must have snapped in The Knight at that moment because he gently picked me up and carried me to bed. He started crying and begging me to forgive him and to never make him do that again… Yes, he was telling me it was MY fault that he’d done what he did.

We were together for nearly 3 years and The Knight would never admit that he abused me, always saying that it wasn’t abuse because he never actually hit me. No, he didn’t hit me with his fist, I’ll agree to that, but throwing one’s partner 10 feet in the air, throwing that same partner repeatedly into a snow bank, constantly berating one’s partner, constantly accusing your partner of infidelity and demanding to know where they are every moment, or holding a shotgun to your partner’s head while they’re begging for mercy, are ALL forms of abuse.

Only after seeking help from the local domestic violence shelter’s support group was I able to see that I really WAS being abused and that it was NEVER my fault. HE was the one who was damaged. HE was the one at fault. It took me a very long time to recover emotionally and even longer to forgive The Knight."


5 things from her story:


1. He was jealous when guys looked at her AND it was her fault that they looked at her.
2. No physical abuse for a year, just constant accusations of her infidelity.
3. Yelled at her. Physical abuse began.
4. He cried and begged forgiveness as he said "please don't ever make me do that again" (still her fault)
5. He never admitted he abused her, since it wasn't a fist/hit (though he tossed her across the room, etc).

This friend is currently happily married and recovered from those dark days. Thanks to God and to friends, and to the grace that helped her walk out of a bad situation, and into forgiveness and true life, she is living a completely different life now. She says if her story can help one person out of the pain she went through, it is worth it.

Here is the picture she recommends to see if you are in an abusive relationship. You can see this at www.domesticviolence.org/violence-wheel 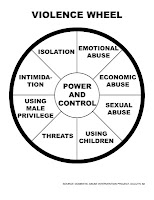 Posted by Holly Tumpkin at 9:54 AM