Yesterday I highlighted Day One of our Friendship Camp.  Even snuck in a few cute pics. Day Two was even more fun as we had activities that helped us really get to know each other, and we got into some nitty gritty stuff about the issues girls fight about. 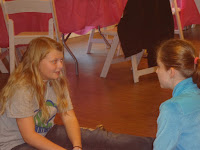 We had lively discussion about how boys fight versus how girls fight.  The perceptive and brilliant girls came up with their own conclusion (I just asked three questions and let them talk). Conclusion? Boys fight physically vs. girls fighting mentally and emotionally (aIthough unfortunately girl physical fighting isn't completely unusual.)

Girls discussed this at their table with a group first, then we discussed it as a group. 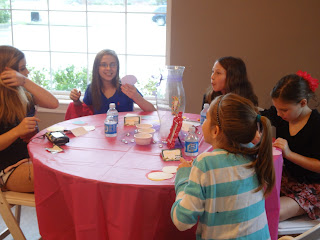 Another interesting dialogue was based on the pros and cons of having one best friend - and the pros of having a variety of friends in our lives. 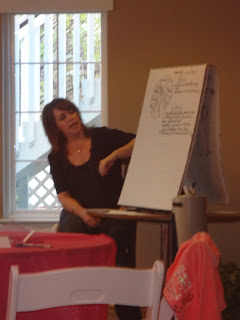 At this upper elementary age, it seems the most common thing I come across is friends fighting with each other about who is friends with whom. 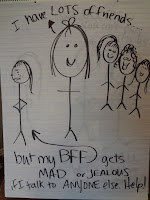 The strength and frequency of this problem frustrates me as I watch girls stress over it....

SO I told the girls A BIG SECRET.

Friends are gifts. We don't own each other.

You are allowed to have more than one friend!

And your friends are allowed to have more than just you as a friend!

So why are you giving your best friend a hard time because she spent time with another girl yesterday?

And why are you stressing out that your best friend doesn't want you to ever invite a different friend over to hang out?

What if your answer was "Ok."? Not a mean OK, just "ok". (As in- instead of having to receive her words as a panicked threat, it's more like "wow, ok, that's sad, I'll miss you but I wanna be friends with her, so I guess that means we can't hang out anymore if you're making me choose...so wow, sad, let me know when you change your mind cuz I like you both" kind of thing. Make sense? :D

What would happen? (is that plausible?)

Nobody owns you. You don't own anyone. Friends are gifts that are given into our lives and we should treat them with care. And you should be expected to be treated with care.

Not an earthshaking revelation...but maybe a small enough of one to trigger a new thought...a bit of good news...a new shift in perspective. Some girls seemed to light up a bit when they realized they don't have to stay stuck in the murk and mire of the drama of who vs. who vs. who is with who. "Wait! I don't have to play this?!"
And it's definitely not a RUDE thing! We don't have to get sassy and full of an "Nobody owns ME!" attitude!

But we can do a simple mental shift and release ourselves from feeling the pressure of being dominated by someone. Or from our own attempts to control other people.
It doesn't solve everything, but it does give a beginning point.
The idea I tried to share is that there's enough love to go around. If we can grow towards being accepting of the fact that we can all have many friends, and that we don't have to feel threatened by someone else, the world would be an easier place.

That's a lofty goal for some at this age, (and adult age haha) but it doesn't change the truth of it. Giving an explanation and a standard to rise to is helpful. 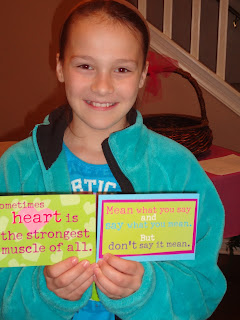 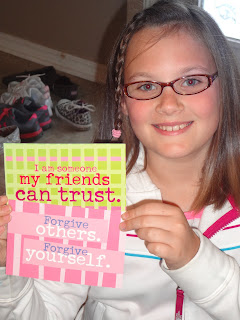 Posted by Holly Tumpkin at 5:25 PM