How do you respond to a Mean Girl?

On the final day of Friendship Camp we defined Relational Aggression. 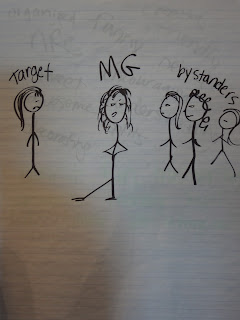 Remember how on Day Two the girls decided that boys fight physically and girls fight emotionally?

Relational Aggression, or RA, is a  fancy term for girls using relationships to mistreat each other- (silent treatment, exclusion, isolation, rumors, cliques, I won't be your friend if, etc).

We role played quite a bit using the MEAN GIRL, the TARGET, and the BYSTANDERS. Talked about feelings of each, motives of each and OPTIONS for girls to use if they are in any of those situations.

The girls were challenged all week to be SHE-ROS and to come to defense of yourself AND others when people are being mean. We had a black cape they got to wear when we role played :) The world needs more She-ros who are brave enough to stand up for something! 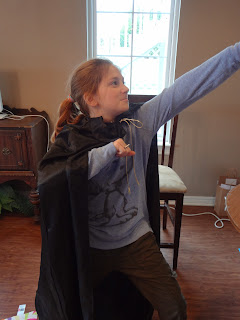 FYI- here are some tactics we shared that your daughter can use:

No matter how much you have to fake, respond in confidence. She is less likely to pick on you if you appear confident. Even if you have to go around the corner and break down when she's gone.

Remove yourself from the situation. A simple confident "that's not true" or "stop it" followed by leaving is fine.

Use humor to diffuse the situation.

All girls will be bystanders at some point, and they actually have a lot of power. Typically, bystanders are afraid to say anything to stop the meanness, because they know they could then become the target of meanness too. But better to be brave and be a she-ro.

We talked about having EMPATHY for the Target and doing something about it.

Simply say something to the MG. "hey lay off" or "hey that's not true" or "what are you doing? leave her alone".

Body language- just go stand by the target. They won't feel alone and now MG is looking at two people instead of one.

Bystanders band together and leave MG.

Go up to target and say "hey let's go to class" and walk off with them- just help them get out of the situation.

If it's a really bad situation, tell an adult.

At the end of the day we videoed girls telling some things they learned this week. I was so happy to hear them quickly say solid practical things they left with! Woo hoo!