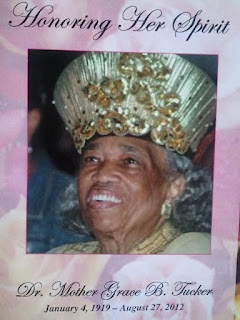 ﻿
In a day short on role models, especially for women, I'd like to introduce you to one today.

Yesterday was a Memorial for a lady who was known in our city as "Mother Tucker". She was like a Mom to the whole city.  She lived 93 long years, with most of those decades dedicated to serving the poor and homeless of our city.

I had the privilege of meeting her once in the mid 80's while I was in college. I visited her shelter and simply folded clothes with her, preparing them to be handed out to the homeless.

Of her 93 years, I only had one hour with her, but as was spoken at her funeral, when you were with her, you sensed a spirit of greatness. Meekness and boldness at the same time.


She has been honored by our State, our Governor, has a city street named after her, along with many other recognitions.

Her name is synonymous with helping the poor and needy of our city. She was also the first black woman in Tulsa to pastor an integrated and nondenominational church. She didn't even stop when she hit 90, but had been at this for 60+ years when she died of natural causes.

And that she did more with nothing than many do with much. Through all of the difficulties she endured, she never gave up.

Her motto was "Everybody is somebody".

Her family summed up her life as one who loved.