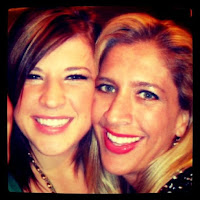 It's possible to be mean without thinking you're mean.  Your daughter may tell you she's not mean and that everyone else is, while in fact she's being mean.  She may hide her behavior from you entirely, but act out when you're not looking. It takes a brave and humble mom to admit and deal with this, and an even braver and more humble mom to write a blog about it.  I'd like to introduce you to one today! Meet my friend, Heidi, Britni's mom.

Heidi and I have been fab friends since we were 18 and have lived much life together, full of fun (and our own drama).  We've laughed so hard we've broken belts and been kicked out of collegiate classes, and I'd like to think we invented the Mac. Or at least photobooth.  We distorted our own faces without the use of a computer and spent hours enjoying our amazing ability in the mirror!  This was back in the day before anyone had a computer at school and (gasp) the internet didn't exist!  Since then, we've birthed a combined total of 9 children and have done lots and lots of momming.
Yesterday we heard Morgan's side of the ongoing middle school story. Today Heidi is gladly sharing her perspective from the Mom point of view. I must say, it doesn't always go well when moms get involved, more on that subject later, but this is one situation that was a success.  The success was partly due to the attitude in which Morgan's mom approached Heidi, and even just as important, Heidi's open attitude to hear hard things about her daughter. Moms, pull up a chair and listen.

1. I'd received "the call" from Morgan's mother, on numerous occasions, regarding how Britni was treating her daughter. We spent a great deal of time discussing the girl's personalities, patterns of behavior, and various offenses. I was glad her mother shared her feelings and how her daughter was affected by Britni's treatment, and truly wanted to see things mended and resolved between them. Taking initiative to appropriately deal with the other party I think is imperative. Consider the other parent may be totally unaware. I was open to tough words and criticisms and it shed light at home with Britni beginning to act very abrasively towards her siblings or when she'd have other friends over. Britni had the stronger "leader-type" personality; Morgan was shy and a follower of sorts. Efforts were definitely made on both of our parts to help guide, instruct and counsel our daughters on how to share their feelings appropriately, and what is or is not acceptable behavior. My kids know that when a teacher, classmate or adult has an issue with them, my first question will be directed to them, "What did you do to play a part in this?" I've noticed that parents who are quick defenders of their little angels and believe they can do no wrong, will create self-centered, self-serving children (call it bratty), or will at some point be devastated about the devilish behavior their kids are capable of. God's Word promises us that "foolishness is bound up in the heart of a child." Some have a larger capacity for it than others, but all are capable of foolish behavior. We need to be "parent" enough to see the truth about ourselves and our children and be willing, humble and forthright in our path to correct it.


2. If your kids are behaving badly elsewhere, you may not be aware of it until you see it manifest at home. When bad behavior rears it's ugly head, you can be sure it's not contained within the walls of just your home. It WILL be seeping out somewhere else or upon someone else. So pay attention with how they are treating siblings and obvious signs of disrespect at home.


3. Sometimes as parents, we are backed into a corner with choices for our children. My gut told me to get her out of school and give her a long break at home. My mind told me I'd ruin her education. My heart told me she was at her breaking point and needed an intervention of the Mom-kind. My spirit said she needed some peace and deep inner healing.


4. There were so many changes the kids and I were having to make and adjust to.  The one stabilizer was, I thought, keeping the kids in their Christian school with their friends and familiar environment. Everything else in our world had changed: no dad, loss of our home, business failure and much more. Everything for them had changed. I fought hard to make ends meet to keep them in their private school. When I saw how difficult life was getting for Britni, I didn't realize it had a lot to do with her lashing out and subsequent backlashes with her friends.  She seemed to have managed to put her self smack in the middle of every conflict between friends or the boys whom they liked. She'd become the go-between, the secret-agent, The Informer. I realized she wasn't functioning well, at all, even though we were only two months into her school year. I made a very tough decision to step in, remove her and bring her home to homeschool her. This was about the only thing that I was in control of and could do about the situation. Taking a break from the catty girls and bringing her back to a safe place was the best thing I could have done at the time. I also withdrew my two younger children in k-4 and k-5. They too were anxious and emotional with attending school. We had a wonderfully restful, peaceful year at home together.


5. I thought it interesting that she felt so alone. We spent hours at a time together pouring over her troubles, anger, frustrations and attitudes. The year at home was a long one. Many times her anger was turned on me or her siblings since there was no one else to blame. We had many emotional talks where she'd drain out her thoughts, disappointments and struggles. Listening was key. There is one thing that comes to mind that kids don't understand.  They may feel alone in their pain or suffering, but they are not truly alone. Britni probably felt very alone in her brokenness, voicing "Nobody understands me!" "You don't understand or know how it is!!"  But I know the reality of how much investment was made in her life. She was also reaping consequences she had caused in her life- isolating herself by her own actions of poor friendship. Perhaps it would have been helpful to point that out to her in this light, that we do bear our consequences and choices very much on our own, no one can pick up our hearts and carry our burdens in their entirety.  But we, as a family, and with God as our Father, can bear each other's burdens and help lighten the load. And in fact, that is just what happened. When she returned to school the next year, she was a changed young lady. Kinder, compassionate, considerate, well-liked, more self-controlled, stabilized and a healthier perspective on who she wanted to be. She eventually became cheer captain and was the class president her Junior year. This period of time was when I realized I needed to truly invest in learning more about parenting through adolescence, study teen development and issues, read respected authors and counselor-recommended books, and how to be more pro-active instead of reactive as a mother.


6. Parenting is not for wimps or the faint of heart. We were all once foolish children. Hopefully with the help of our loving Father God, we too have been disciplined and Disciple'd into maturity.


As Heidi and I talked over the phone, what Heidi said caused sudden understanding for me about the "aloneness" factor. What she said is true. No matter who was around Britni at the time, talking with her and loving her through her struggles, there was still a feeling of aloneness in Britni.  That was one of her consequences, the friendless corner she had backed herself into. Sometimes no one can take that away. We bear consequences for our actions. Remember that in Britni's telling of this, she said though the year was hard and lonely, that was at the point God began working in her life.  Sometimes only God can restore.  But we have to allow Him in to do that. As moms we want to relieve all suffering from our kids lives, but sometimes we have to stand by and watch it happen, while still supporting them, in order for them to grow. That's not easy.

Special thanks to my dear friend Heidi for sharing a glimpse into her side of the story.  Thank you for those good words to moms.  It is hard to hear anything negative about our kids and it takes a strong mom to do so.  The way she handled Britni in this situation helped to restore her and to also protect a friendship that has ended up surviving many years.

And she continues to pour into many teens' lives on a daily basis.

More coming up on when and if moms should get involved in girls conflicts.  Now that's a loaded topic!