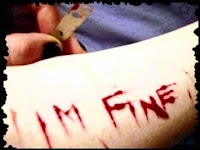 To tell or not to tell. That is the question.

In the tween and teen years, generally speaking, it is taboo to tell on someone. However, on occasion it may be essential for a friend's safety.

That said, sometimes it's hard to discern when it's important to tell, then equally hard to have the guts to tell, when you may feel like you're ratting out a friend.

I've heard of and experienced quite a few sensitive situations like this over the last 9 years of talking to tweens and teens.

When I ask middle schoolers if they have personally known someone affected by abuse, cutting or suicide, about 70% say they have at some point known someone affected by each of the 3 categories. They also confirm that drug use is a huge temptation or struggle for many people their age.
If cutting, drugs, suicide and abuse are that prevalent among 6th, 7th and 8th graders, odds are that your tween or teen knows or will know someone struggling.

So the question is, what do they do about it? Anything?

My first thought was that our culture has turned into one of such an independent spirit, that often even we adults turn our heads away, with the attitude of "It's not my business. Someone else will deal with it." But do we leave kids in danger when we have that attitude?

However, in discussing this blog with my friend, Dr. Krysclie Mayer, Psy.D., she shared a different perspective that I think is much better than my original thought. She said "I might quibble with your idea that our culture has an independent spirit. I think I know what you mean-that people tend to "live and let live" --but I think it's due to a tendency to be very dependent...dependent on someone else to do something, say something, take care of a difficult situation.  I think it's an outgrowth of nanny-state-ism, fear of liability and/or not wanting to be perceived as judgmental, etc. Dependency is a huge impediment to people confronting situations that are truly unsafe for others."

So maybe even we adults are afraid to step in to difficult situations, but when teens act the same, don't we wonder how no one thought to get help? There is a horrible news story, (an extreme example), when in 2009 there were multiple witnesses of a 2 1/2 hour gang raping of a girl, where no one got help. How could no one report this? Teens watched, but didn't report it.

That's so extreme, but there are plenty of other instances where fights have gone on in our own schools and few think to get help, even though many will video it.

Last winter in Oklahoma City, a big fight at a high school was in the news because of it's severity, length and how it made the rounds on Youtube (video no longer available). Details are unclear about whether anyone went to get help as the guy was getting beaten, I'm going to assume that someone did...but how long did it take? The video of the beating is long, and obviously because there is a video, some chose to record instead of or while help was being sent for. Still, the video showed people walking by the beating, seemingly unaffected.

Years ago in high school I remember happening upon a group of guys beating a guy senseless. I was so horrified that anyone could do that to someone that I think I froze and did nothing but leave as quick as I could. (Everyone that knows me well knows I freeze at emergency type situations haha). I still remember that and wish I would have gotten him help.

I'm also grateful to say that there are those responsible teens who will tell an adult when something dangerous is going on with a friend. Several things come to mind. One girl told higher ups when a person was doing drugs in class unnoticed. A girl told when a friend was drunk at a lake. I know of a few girls who got adults involved when  friends mentioned or contemplated suicide. A girl told an adult when a teacher made sexual remarks to the class. Was it risky to tell? Yes. Would some people consider them a rat? Probably. But more importantly, people got the help they needed to steer clear of more life-threatening danger. All of these  who told were brave, responsible and made a difference.

When a life is at risk or in danger, or illegal activity is involved, it becomes necessary to tell. A true friend will get help before it's too late. It takes guts. It also takes someone willing to risk a friendship to get the help needed. I would rather tell an adult that my friend is in a dangerous situation and have her mad at me, than to do nothing and have disaster strike, knowing I could have stopped it.

But how is a 6th grader supposed to know what's truly dangerous and what to do about it? One example- cutting is so common. Many tweens and teens know people who cut, but never tell. All the teens may know that so and so cuts, but it's rare that they tell an adult. The kids may think, "I know it's not good, but lots of people do it". What they may not realize is the danger of cutting.

According to the Mayo Clinic, "Self-injury can cause a variety of complications, including:
"Inside a Cutter's Mind" by Jerusha Clark with Dr. Earl Henslin is an informative book to "understand and help those who self-injure". I have come to just ask bluntly about cuts if I see them. One girl told me you'd be surprised how no one ever asks about obvious visible cuts.

Most kids know who uses drugs, who is high in class, even if it escapes the teacher's attention. Most kids know who the creepy adults are- the ones who do inappropriate things and give most students the heebie jeebies. It's also far too common for our teens to walk around with the knowledge that a friend gets beaten or abused at home. These are serious life issues that are very difficult, delicate and hard to deal with. What do they do with this information?

Even responsible adults may believe in different approaches for these sticky topics. But as long as you talk through your beliefs with your children as to what is appropriate and needed, they will be armed. Make sure they are comfortable coming to you with information.

Did you know most schools have an anonymous hotline you can call to report suspected behavior? You can also call if you fear someone might be a victim of something negative. It's not our job to investigate, accuse and bring change to a person's life, but it IS the job of  professionals. We can take responsibility to report suspicion to professionals.

If we can report suspicious behavior, the professionals can investigate and take necessary action if needed. Find out phone numbers of your local centers or hotlines to call for different needs. Find out if your school has an anonymous tip line.

Resources:
Inside a Cutter's Mind by Jerusha Clark with Dr. Earl Henslin
How to Talk to Your Kids About Drugs by Stephen Arterburn and Jim Burns