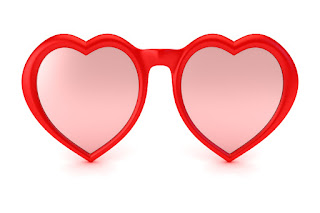 Know any teens (or adult friends) that are dating a questionable guy? Can you see bad signs that they can't see?

Isn't it always that way....things are obvious to everyone else, yet the rose colored heart shaped glasses that the one "in love" is wearing, somehow block her eyes AND ears from seeing and hearing what is readily evident to others.

I know it's hard to convince those in the thralls of love of red flags that we see, but it can't be impossible, so let's try anyway!

Perhaps reading some real stories from real ladies who ignored dating red flags, then lived to regret it will get their attention. Maybe a story will look strangely familiar to someone in the midst of an iffy relationship.

For that reason we are sharing a variety of stories from some willing, but anonymous women. If you missed them, PART 1 and PART 2 are worth going back and reading.

Today, another woman shares her experience.

After a long difficult marriage, this lady is now divorced from her first husband (but has a beautiful story of restoration. She's now married to the man of her dreams who treats her like a princess). Here are her words:

1. Both friends and family would say things like "I don't like how he treats you." But blinded by what I thought was love, I always found a way to justify his behavior and excuse him.

2. I often took the blame for the way I was treated..surely I did something wrong to make his behavior reasonable.

3. I didn't recognize the sly or obvious ways I was being manipulated or controlled. He played with my emotions.  He taunted and threatened that if I were to leave him or break up, that somehow my life would not become all that it could be if I stayed in the relationship.

For example: he would hold my engagement ring hostage, demanding it back when we got in a fight. He made me feel as if he made a huge sacrifice to "pick me" out of the vast crowd of women on the planet...that I was somehow honored above the rest and if I didn't want to be "his lucky girl" someone else would easily take my place. He may or may not give me back the ring, and it was on certain conditions. It was very manipulative. One time he gave my engagment ring back to me right before I got on a flight to go home for the holidays...where he knew I'd see my ex-fiance.

He broke up with me various times, always with him in control of "the ring".  The disgusting part of this is how that played out in marriage. I always got a bigger ring/diamond or piece of jewelry after the apology of each affair. I had quite a stockpile by the end...ha!!

When married, he literally wrestled me to the ground trying to pull the ring off my finger, and grabbed my diamond bracelet off the counter.

4. When dating, he pressured me to do things he knew my parents had asked me not to do. A simple example: I flew home for the summer during college and kept my car in storage in my college town. He wanted to drive my new car instead of his jalopy around town while I was gone. My parents and I both said no. He actually stole it out of storage that summer and didn't admit it until months later when I noticed scratches on the paint job where he'd locked himself out and used a coat hanger to unlock it.

Lies, lies, and more lies. These all seemed reasonable to me, because I was compassionate towards others needs, and felt as if somehow it's not fair how my life is good and someone else has to struggle with less.

5. He pressured me into a physical relationship even though he understood ahead of time my resolve to keep our relationship pure. He used moments to try to seduce or entice me...he said this is how I prove to him that I truly loved him and was committed to him. Beware of anyone who begins a relationship making the statement, "Whatever you do, don't lie to me or cheat on me." Realize it very well may be out of their own fear of being capable of the same!!