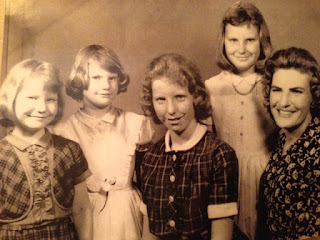 We are overdue for another 5 Things Story!

Recently I had a getaway by myself for a week (unheard of, I know!) It was delicious. I went to see a long time friend that I rarely get to see, Christine. Chrissy, as I call her, is 2nd from the left in this childhood picture.

She is surrounded by her sisters Cecelia, Michelle and Lou Anne. We are highlighting their mom, Rita Laughlin.

Christine and I both used to live in Phoenix in the early 1990's, where we shared some FUN memories. She is high drama (the good kind), verbose, quick witted and is always game for whatever comes along. We've also known each other through some not-fun drama and difficult times. She inspires me with her faith that is SO real and very solid. She has one of the most inspiring relationships with God that I know.

I had just known her a short time when her mom passed away in 1992. I did get to meet her once. Christine tells such fun things that her mom did growing up. While I was enjoying my vacation at her house recently, spending time writing, I asked her if she would share a 5 Things story about her mom. So we sat down and I asked her to tell 5 things she's glad her mom did while raising her. Christine and her sisters grew up in Phoenix in the 1950's and 60's.

1. The most important thing I think my mom did was to set an atmosphere in our home that God was real.  That He would meet us where we were. She taught us all how to pray. Saturday nights she would gather us all to pray. She was brought up Catholic. She understood talking directly to the Father. So she would gather us together to pray and ask God directly for what we needed, which was often food. My father left when I was very young. I never knew him. She taught us how to seek God, how He would care for us, and how He was real, in a very tangible way. That He could be referenced every day of week. She was baptized in the Holy Spirit when I was 14. She ran prayer meetings at our church (one of first women to do that). She gave us a strong understanding of who God was. That's the most valuable thing. Each of my sisters is still serving the Lord based on that heritage.

2. She taught us a strong sense of family, by what we did together, as in family activities. For holidays- she would go all out, with limited stuff we had. She sewed us each a new outfit for Easter. She put out every type of finery that she had to show us that God's days were to be handled in excellence. She made  treats that we weren't used to having. She went all out. At Christmas we would each get a present and some additional things. We were very low income but had no idea. We thought we had the finest of all, "most deluxe". She cared for us, cooked for us every day. We stood behind our chairs before dinner to pray then sat down. On special occasions in the spring, she would put the table outside and we would enjoy a dinner outside, just for a different fun atmosphere.

3. She read to us. A favorite memory is how she would put us to bed, then sit on stool in the hallway where my sisters and I in both bedrooms could see and hear her. There were 2 sisters in each of the 2 side by side bedrooms. She would read us the classics. (She didn't believe in TV per se). We would lay there in beds and just imagine all the words. She was gifted with language  skills and wit. It gave way to an understanding that imagination was everything. We believed we could do anything.

4. She emphasized eduacation. After we were grown, she went back to school for a degree, in her 50's, when she had more disposable income. She placed a huge emphasis on using all that God has given us to explore the world.

5. She gave us an appreciation for entertainment! On Saturday nights, it was big band music. She taught us to dance and sing. We had to come up with plays and skits to present to each other. My mother's father was a stage actor and her mother was a flapper. So she was into drama! I've come about it honestly! My sisters and I carried it on with our kids when  they were little. In fact I just had Misti perform a riverdance for me. (Her 30-something daughter) . She valued entertainment and arts. I see it in all of my sisters.

She had tremendous wit and intelligence...a brilliant woman, but she was also harsh at times and needed healing because she grew up in an orphanage for a time. My grandma, her mother, was super selfish- with the "star" situation she had going on. When my mom was young she contracted polio and her mom sent her to live in an orphanage for a few years. They did come get her a few years later.

She taught us community, responsibility for family, how we fit in. But the greatest thing - I would literally see her pray on her knees for food, and groceries would come. That was normal to me. Society back then did not have all we do now. Two parent families were normal, not our situation. People made fun but she provided a safe environment. We thought we lacked for nothing.

She made us go after God- literally by walking to church and catechism, in Phoenix! The priest was like Jesus to us. I remember his booming voice as my eyes peeped over the eye level pew. I was terrified and mesmerized. At Catechism they showed slides about Jesus, and after each slide was a beep. Jesus walked on water... BEEP! I was enthralled.

I can't imagine raising 4 girls, the fighting, by myself, and trying to believe God for food. How she held onto our house is a miracle I'll never know.

She never let us know we were about to lose the house or anything, if we were. At one point, for a year or so, she went through a depression  or breakdown when I was young. I just remember the house was dark. Normal would be lots of light and music playing. It was a short period. .

I don't remember ever coming home without a great meal on table. She loved to cook. When we got to high school, she taught us to cook and we took over.

She was a great mother and to me a great role model. It's why I'm "old school" now. Once she did allow tv, it was old movies and Bonanza. She was super strict on what she allowed in the house. We couldn't bring magazines or any new found things, it was heresy (said with a chuckle). I think it was because she understood it was God that got her through and she wanted to honor Him. When we purchased a gift for her, 80% of the time it was something religious because it so important to her.


In my opinion my mom had a lot of shortcomings, but she did what she was supposed to do, which was raise us up in the fear of the Lord and give us an understanding of Him. She gave us family, trust, community, safety and responsibility.