What a fun time!

What was camp like?? 13 fourth and fifth graders came together, most of whom didn't know anyone else at the camp (that means they came SOLO!) But new friends were made and lots of fun was had. 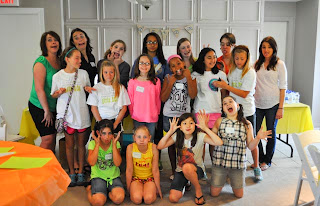 By the end of camp when they were all happy and at ease, I asked how many didn't want to come on day one and were forced by mom....several hands went up (which is always the case). But props to you moms for making your girls go, because everyone had a blast and they all said they were so glad they came!!

We had three days of games that were a hit, talking with new friends, role playing, videos, discussions on current friend issues, ponderous moments, as well as hearing stories, encouragement and advice from college girls about their own friend experiences.

What makes a good friend? How do I handle conflict with my friend? What are the ways girls fight vs. how boys fight (and how come?!) How can I make friends at my new school where I won't know anyone? Does everyone secretly feel the way I do?

We even got to hear from Lacey Russ, Miss America's Outstanding Teen 2011. She encouraged the girls with her advice of what worked best for her in making friends, as she was "the new girl" a couple of times in life. She showed her crown and let the girls ask anything they wanted.


Another college helper shared how she never felt she had that one BEST friend connection that girls want so badly. Though she had a lot of friends, there wasn't one she called "best". She told advantages she now sees in having a variety of friends instead of just one bff.

Then there was the college girl who shared her very real experience of being the mean girl, and how she lost all of her friends. After soul searching, she changed her ways, made some apologies and learned to be a good friend.

Here are some comments made by the girls at the end of camp:

"I liked the camp because I learned alot on how to be a better friend and what I've been doing wrong and I can change myself."
"I liked meeting new people."
"I liked this camp because it gave a lot of advice- friendship, bullying and what kind of friend you should be. I will be the new girl next year so this advice really helps."
"I liked all the games we played and all the people here. I also liked how much I learned about healthy friendships."
"What I like about camp is that it's super duper fun!"
"I like that we played games."
"I learned how to deal with girl drama."
"I liked meeting new people and watching all the girl drama videos."
"I learned you do not have to like everyone, or be friends with everyone, you just need to be nice to them."


On that last comment, we talk at Girls 101 how it's natural to gravitate towards people who are similar or have the same interests. You may meet people you truly don't care for, that you have nothing in common with. It's okay that you may not care for them (ssshhh!!), and you don't have to be a hang out buddy with them, but all people deserve politeness and respect from us. Basically, no one should be able to tell who the people you don't care for are.

Empathy was the big word of the week. Everything we did came back to the word EMPATHY and the Golden Rule. 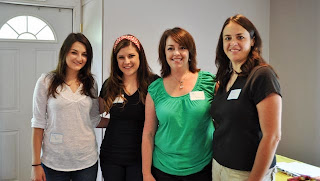 As one of the college volunteers summed it up, "Be the friend that you want others to be to you."


More camps coming up, be on the watch at www.5things.us and on Facebook at 5 Things!

Posted by Holly Tumpkin at 4:25 PM