Pt 4- College Girls Speak Out, What They Learned about Life 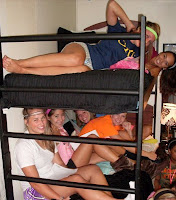 Enjoying reading these little clips of thoughts from girls about their freshman year of college? If you missed any, catch Part 1 here, Part 2 here and finish up with Part 3!

Today, we hear from two final girls about their first year of college.

The first young lady went to public high school, then on to a state University. She then became part of sorority life and has loved it.

"I expected more peer pressure. I didn't really feel it. I went to some parties at first because that's all there was to do and everyone goes. People asked why I didn't drink, I said I never had and didn't want to. They respected that. I didn't get flack for it and no one treated me weird.

Later I found friends that were like minded and we found lots of other kinds of creative fun to do instead of the party scene. Parties get old if you're not drinking. Unless there's dancing, then it can still be fun.

There is a stereotype that girls are just in sororities to party and drink. It's not true. It is so much more than that. I didn't party, and instead gained respect for what I stood for. I guess people felt like I didn't judge others who did party because at the end of the year I was asked to be chaplain for my sorority, which I accepted! "

And another girl who went from public school to a private Christian university.


"College was pretty much what I expected it to be. I went to a Christian college. Met great friends, all on the same page, the atmosphere of the school was great. It was the only time in my life I'd been surrounded by so many like minded friends. It was easy to avoid the few partiers there were. There were some parties but I didn't go. The friends I met were all pretty much like minded to how I was raised. Many people I met didn't want to go there at first but then felt like God led them there. Once they got there, the environment and people made them super happy to be there! First semester, I had hard classes, I was buried in books, my friends had to tell me to go have fun. Second semester I had a great group of friends, I worked on campus instead of off, which gave me more time, and I had even more fun. I love being busy and being involved."


I asked one particular question to all 5 girls that have shared this week.


"What is one thing you learned about life during your first year away at school?"


I learned balance. No one was there to tell me what to do. I had to figure out sleeping, studying, eating and socializing. How to self manage my time. It's hard to do.

It was different than growing up years. No one was cheering me on or patting me on the back for doing things. No one cares if you do it, but they do care if you don't. I had to do things because it was right, not to be recognized.

I learned responsibility. I guess I tended to be lazy at home (ha), but I did manage to be responsible at school.

A lot of people dress messy for class and all during the week, but I have to dress nice to feel good and stay awake.
Posted by Holly Tumpkin at 8:49 PM